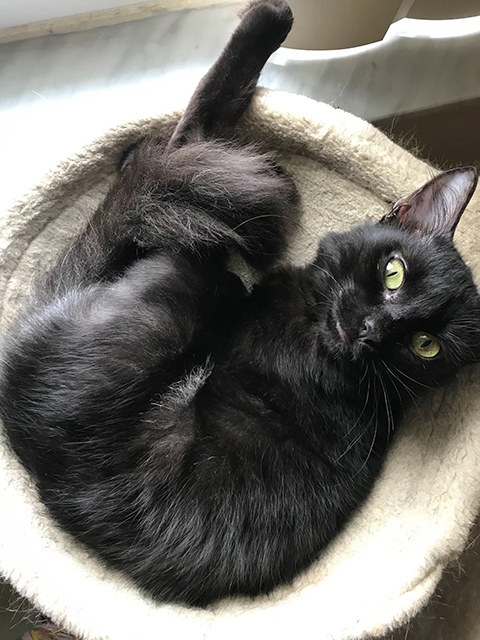 Meet Tonks, when this precious kitten came to Pinellas Animal Hospital she was very sick, couldn’t hold her head up and had to be tube fed. One of our technician’s Kendra took her home to foster her and give her the care she needed. Once she realized the scope of Tonks’ medical problems she decided to adopt her to ensure she got the care she needed. 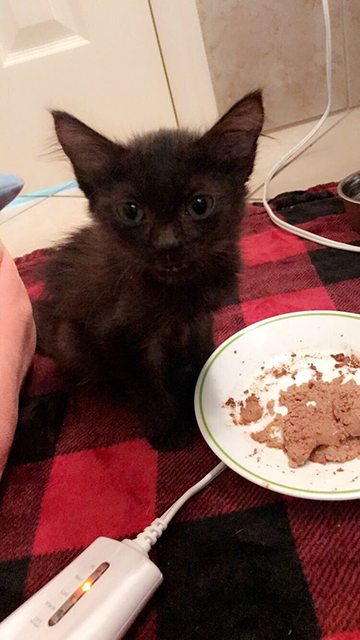 During one of the follow up visits, it was determined that Tonks had an upper respiratory infection that would not resolve, even after trying many different treatments. Dr. Wallen recommended checking her throat while she was under anesthesia for her spay and umbilical hernia repair surgery. During the examination, Dr. Wallen discovered a polyp (a benign tumor) in the back of her throat which was about 1 inch diameter. This was huge in a tiny 2 pound kitten, as it basically engulfed her entire throat. Once the polyp was removed Tonks was able to breathe with relief and her respiratory symptoms significantly improved.

Unfortunately it wasn’t over for Tonks. A week later she started having significant ear discharge from her right ear. After taking an ear cytology to look at the debris under the microscope it revealed no infection, but a lot of white blood cells were evident. Dr. Wallen recommended using an ear flush for 7 days and when she came in for her follow up appointment it was evident that there was a polyp in her ear canal, similar to the one that had been removed in her throat. This one was too far down to safely reach so Dr. Wallen suggested going to the dermatologist so they can use an endoscope to reach the polyp. 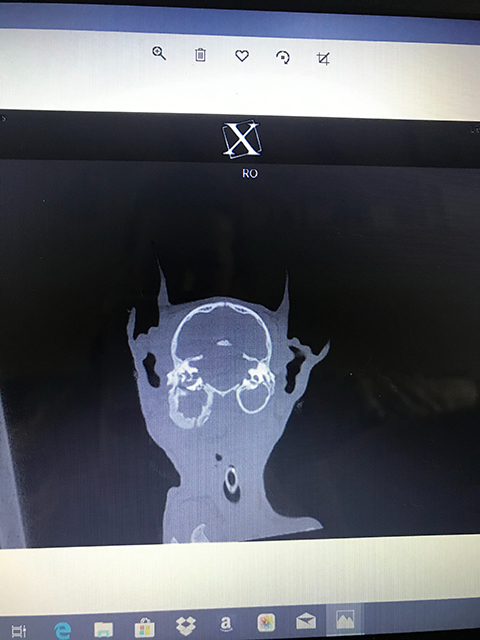 Kendra took Tonks to Animal Dermatology South where she saw Dr. Canfield. There he was able to remove the polyp and did a CT scan. The CT scan showed a thickening of her right and left bulla (the thin rounded bone under the ear). With the right being significantly worse. There were also abnormalities with her eardrums. He suggested surgical treatment.

Tonks went to Tampa Bay Veterinary Specialists to see Dr. Oakes and have surgery on her ear. Due to significant swelling and bone degeneration he suggested a Total Ear Canal Ablation and Bulla Osteotomy surgery which involved removing her entire ear canal. During surgery he found more polyps behind her eardrum which he also removed.

After all that Tonks has been through it was amazing how great she did after her surgery! She is back to being her playful kitten self within 48 hours. She is completely deaf in her right ear and will need to have the same surgery on the left ear in the near future, but that doesn’t slow her down one bit. This is one lucky kitten to have landed in the lap of her perfect human. Kendra has put her all into making sure Tonks can run, jump, and play like any normal kitten and will continue to give her the best care possible after such a rough start in life.