Skip to content
Previous Next
Commitment to Care: Lola 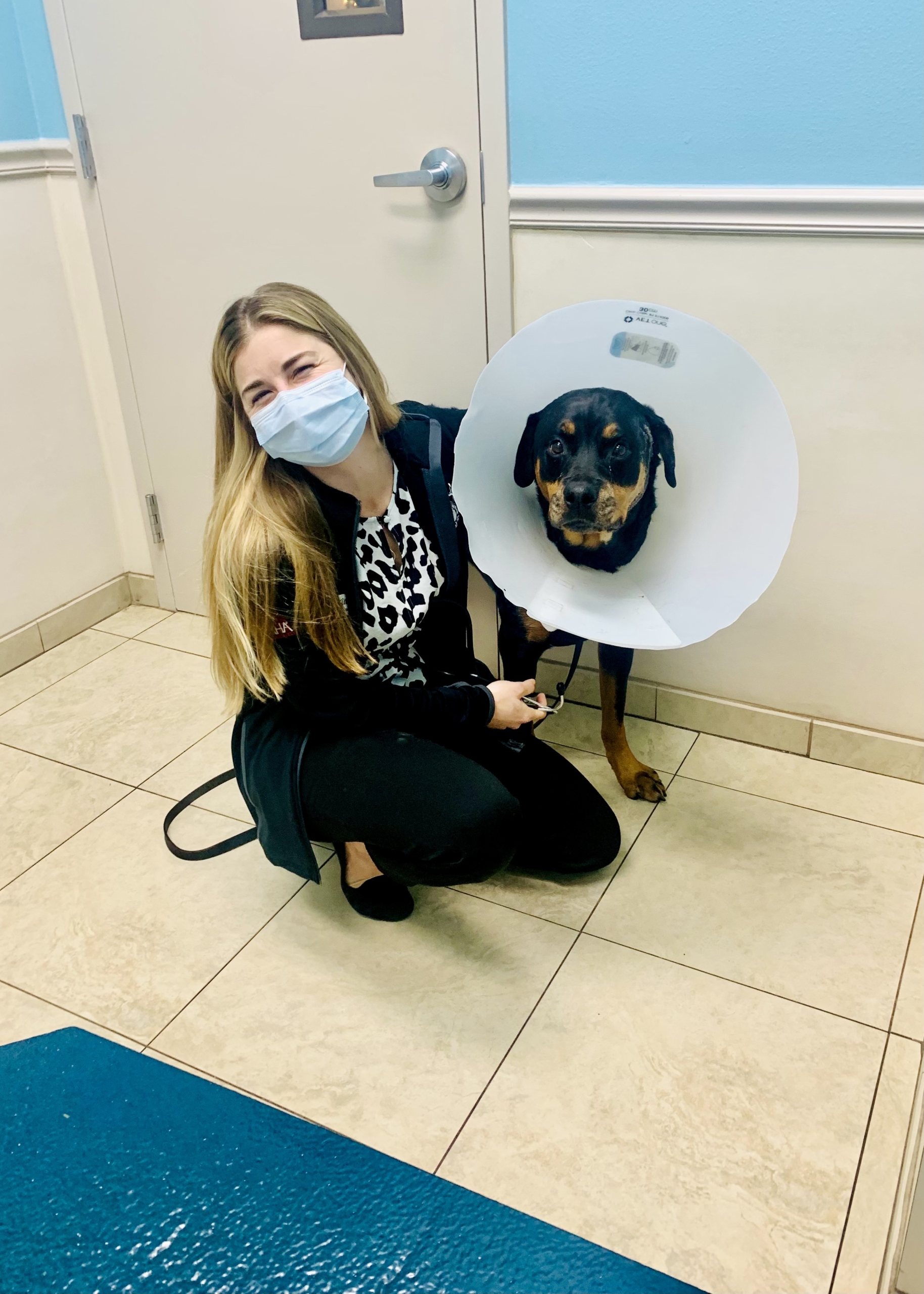 Lola, a six-year-old female Rottweiler, came to the clinic due to excessive itching around her face and left ear.  After performing a full physical examination, Dr. Godfrey noted a large section of acute moist dermatitis on the left side of her face as well as an ear infection.  Acute moist dermatitis, also referred to as a hot spot, is one of the most common skin conditions in dogs.  Hot Spots are localized areas of skin inflammation and infection, which often appears as moist, red, hot lesions on the dog’s legs, paws, head, chest or hip area.  These lesions are incredibly itchy and painful and without treatment, pets will continue to lick and chew at the skin, causing more trauma and making the inflamed area worse.

Due to the severity of Lola’s hot spot and for her comfort, it was necessary to sedate her for the affected area to be treated and cleaned. The area was shaved to allow the wound to heal, followed by a scrub with chlorhexidine and alcohol. Dr. Godfrey also gave Lola a steroid injection to help with the inflammation and prescribed a course of oral antibiotics, ear medication, and an ointment for the infection.

Unfortunately, her parents were not able to medicate her face or ear due to the discomfort Lola was in.  This meant poor Lola needed to return three days later over concern that her ear was looking worse. During this visit she was under the care of Dr. Alberdi, who noted the skin was thickened with excessive discharge and red bumps covering the outer portions of the hot spot. Both ears had a good amount of waxy brown debris and slight redness. It was also noted that the ear cytology showed yeast present in her left ear only, confirming the presence of infection.

Lola was sedated once again; the affected area was covered with sterile lubricant and more hair was shaved to create a wider boarder around the edge of the hot spot. Dr. Alberdi then cleaned the area of crusts and dried discharge and used a scalpel blade to remove any thickened, infected, or dead skin where needed (known as debriding).  Her soft e-collar was switched for a hard cone to prevent further damage from scratching.  Lola was also sent home with a new antibiotic to take in addition to the current one and since Lola was not cooperating for her ear medication at home, a one-time ear treatment was applied.

A little over a week later, Lola came back for her medical progress appointment. She was doing so much better, and the hot spot had begun to scab over and heal. The ears also continued to heal and were now showing no obvious discharge or redness. Another week later and Lola’s hot spot was showing significant improvement. The redness was gone and there was no discharge from either ear. Dr. Alberdi recommended that Lola’s parents use a warm washcloth to remove the dried scabs so that healthy granulation tissue could form underneath enabling the skin to heal faster.

One more week later Lola returned for her final recheck.  She did great about keeping her cone on and taking her medication and was no longer scratching at her face and ear. The soreness and discomfort were gone, and the skin was completely healed, all that remained to clean were a few scabs stuck to her fur.  Lola was able to ditch the cone and needed no further treatment.

It makes us so happy knowing Lola went home a much happier and healthier dog than when we first saw her, which makes our job all the more satisfying and worthwhile!