Skip to content
Previous Next
Commitment to Care: Koko 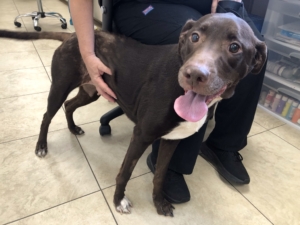 Meet Koko, a six-year-old female hound mix who came into our hospital for a routine appointment due to a skin condition. During a conversation with her technician Missy, Koko’s parents noted that she just wasn’t acting like herself, her food intake had decreased, and her water intake had increased.

Upon examination, Dr. Maia discovered that Koko’s abdomen was firm and distended, knowing that Koko was not spayed, an abdominal ultrasound was recommended. During the scan it was noted that the uterine horns were dilated and filled with fluid. Following this, complete blood tests and a urinalysis were performed, the results showed that Koko had an elevated white blood cell count and a urinary tract infection.

These findings coupled with the increase in water consumption led Dr. Maia to diagnose that Koko was suffering from Pyometra, an infection of the uterus. This condition is very often not detected until it is an advanced stage which can then be life threatening, therefore Koko would need immediate surgery to resolve it. A few days after the surgery Koko started to bounce back and act more like her happy self, eating, drinking, and running around as normal!

In non-spayed dogs, pyometra is an infection caused by hormonal changes in a female’s reproductive tract.  If the pet does not fall pregnant after several consecutive heat cycles, the uterine lining can continue to thicken causing cysts form. These cysts release fluid where bacteria can grow, as a result, the uterus becomes inflamed and infected with bacteria.

How is Pyometra Treated?

Our approach to treating pyometra is to spay the pet, which involves removing the infected uterus and ovaries. With pets being diagnosed later in the illness this can create a more complicated surgical procedure with a longer hospital stay. We administer IV fluids to help keep the pet hydrated and antibiotics are given for two weeks after surgery.